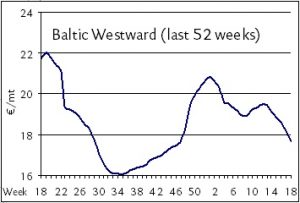 Declines in freights seem to have started to acceler­ate as the days of May lengthen with the lingering impact of holiday-strewn weeks having the expected braking effect on business activity in general. Char­terers have given up trying to play nice for the time being as owners note a more aggressive attempt to push freights to new lows. Cargo demand, despite being promised to return in earnest after Q1, re­mains less than spectacular, to put it nicely. Even for a European coaster market that has seen very little tonnage expansion in recent years, and one that remains thankfully tightly-bound to cargo demand, the wide availability of tonnage is undeniable. High teens that were tracked for most of the year on the westward Baltic route—from Balticum to ARAG—in the range of EUR 18-20/mt are now moving toward EUR 16-17/mt and lower, brokers report. Longer runs from the German Baltic to WCUK are looking at mid-low EUR 20s/mt of about EUR 23-25/mt, depending on terms. This remains true, although traders are already assuming the same business will be going for EUR 22-23/mt by the end of the month. The reverse trip from WCUK to the lower Baltic is seeing 3,000mt general cargoes fix middle teens of EUR 14-15/mt.

It is essentially a race to the bottom for now as owners are happy to get any kind of business with single-digit rates on minerals between the upper and lower Baltic becoming increasingly common. Even the once lucrative southbound rates between WCUK and North Spain are fetching high teens instead of the low-mid EUR 20s/mt that were common just a few months ago. The market is not quite as dire as it could be or has been, yet, but the enduringly poor conditions are taking their toll on owners. The toll is especially harsh for owners who had become used to securing solid earnings of mid EUR 2,000s daily and up on simple trans-Baltic trades. Now the prospects of any earnings at all has become far from certain with owners being forced to make a decision between accepting breakeven deals or re­fusing offers that arrive for being loss-makers. Un­fortunately, with the summer months not far off, it is difficult to say what would trigger a recovery in the northern trades. There is plenty of room for surprises in the grain and commodity trades with the whims of European industry always up for grabs. But there is little on the horizon that can be predicted for the moment other than more of the same for now.

Find out more or adjust your settings.