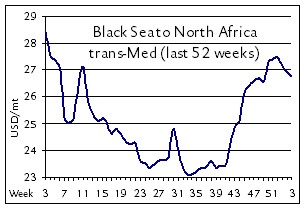 Adriatic Sea market: Imports have been strong into the Adriatic even as general volumes have slowed over the holidays and yearly transitional period. From Rostov, grains of 5,000mt (46′) can still fetch upwards of US$ 40/mt, though charterers are ap­plying pressure there. Import shipments to Ravenna have been strong with steels from Constanta fixing up to US$ 18/mt, corn of 6,000mt (48′) ex-Reni fixing circa US$ 27/mt, BHF of 4,500mt from Haifa getting US$ 22/mt and soybeans of 5,000mt (50′) fixing around US$ 25/mt. Pig iron on larger ship­ments of 15,000mt from Odessa have been reported as securing freights of US$ 20/mt to Ravenna.

Spanish Med: Activity has been relatively high from Seville, despite the holiday slowdown, with agri-prods, construction materials and steel products do­minating the export trade. From Seville, steel coils of 5,000mt have secured US$ 24-25/mt rates to Mar­mara while steel bars of 4,000mt from Seville are able to secure around US$ 20/mt to Skikda, brokers report, while profiles (5,000mt) have been fixed at US$ 25/mt to Iskenderun. Olive cakes (5,000mt) (52′) from Seville have been fixed at US$ 20/mt to Thessaloniki. Grain cargoes ex-Azov are being im­ported to the Spanish Med at circa US$ 40-41/mt. Profiles of 3,000mt were exported from Barcelona to Diliskelesi at US$ 19/mt. Bulk clay (4,000mt) was concluded at US$ 17/mt to Gaeta from Castellon.